Hello, it's me again – Favourite Englishman. I've been tasked with writing a Valentine's Day special edition blog post!
While she was showering earlier today, Dabarai hollered at me “Who are your favourite couples from literature?”
“Literature?” I thought, “I've never read any literature! I've read a few books, sure, but not literature!”
Romeo and Juliet immediately sprung to mind, but that's because they spring to mind whenever I think of couples from literature. But they're not my favourite – studying it for GCSE English sucked any enjoyment I may have got out of Shakespeare. 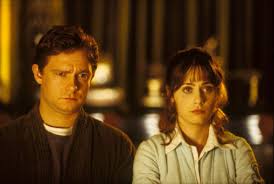 So my actual answer? Arthur Dent and Trillian from "The Hitchhiker's Guide To The Galaxy" by Douglas Adams. I know it's not real 'literature', but gosh darn it it's one of the best book series ever written, and definitely the best radio play turned book turned TV show turned film turned trilogy (in six and a bit sort of parts). And Dabarai asked me to write a bit for her blog about why I like it so much.
Firstly, I chose Arthur Dent and Trillian as my favourite book-based couple as vast distances, time, two-headed aliens and the end of the world cannot come between them. And secondly, I chose them because "The Hitchhiker's Guide" is my absolutely most massively favourite book ever. 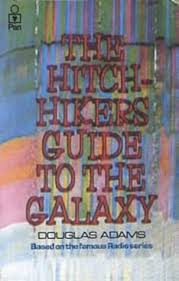 The book has had a massive influence on who I am today, especially my sense of humour and what I find funny. Any attempts at story writing I made through high school and college had a distinctly Adams-esque feeling to them. And I still find the books (and radio show and tv series and film and computer game....) incredibly quotable.
I don't know how well it translates into Polish, but “The ships hung in the sky in much the same way that bricks don't” is one of my all time favourite descriptions from fiction. All the books are full of fantastic lines, asides and paragraphs, but it's also a great story. And, I suppose you could call it a love story – a love of a man and a woman, a man and his best friend, and a man and his dressing gown.
I won't go into much more detail, as I want to fill the post with spoilers, quotes and descriptions, but I shan't. You must read it for yourself – you won't be disappointed.
Just remember: there is a theory which states that if ever anyone discovers exactly what the Universe is for and why it is here, it will instantly disappear and be replaced by something even more bizarre and inexplicable.
There is another theory which states that this has already happened.
Autor: Dabarai o 10:25
Wyślij pocztą e-mailWrzuć na blogaUdostępnij w usłudze TwitterUdostępnij w usłudze FacebookUdostępnij w serwisie Pinterest
Etykiety: Ulubiony Anglik

Promote your Page too